“Movin’ On” – (Regina Royale Records – 2016) – is ilana Katz Katz’s second record. Her singing and fiddling put new spins on early traditional Blues songs, dovetailing nicely with her more modern original songs and instrumentals.  The arrangements range from the spare on traditionals such as “Baby, Please Don’t Go” with multi-grammy nominated Cedric Watson on gourd banjo, vocals, and washboard – to the full band ilana fronts on classic covers and originals. New York Blues Hall of Famer Bobby Radcliff’s trio offers a tight, full sound backing ilana on “Kansas City,” and on her original “Demon Blues” – a kind of ‘mood Blues’ piece. Bobby shows another musical side on ilana’s original “Cruel Willie Blues #2” where a Country/Jazz groove has ilana scat singing in sync with her fiddle. There are many more gems on this record, including ilana’s collaboration with guitarist Barry Levenson. ilana’s sultry vocals on Big Bill Broonzy’s “Sweet to Mama” from 1935. Levenson also joins ilana on her heart-wrenching original “You Crush My Soul.” Beyond those full band numbers, there is a truly beautiful simplicity in ilana’s collaborations with Cedric Watson, mostly recorded live around a single mic at his Lafayette, LA studio. He is known for his Creole music, but his rootsy gourd banjo is yet another facet of his immense talents. ilana’s original instrumental (dedicated as “Blues for Bobby Radcliff”) features ilana and Cedric twin fiddling – backed by grammy nominated Chas Justus on acoustic guitar. Chas’s playing guides the inspired music as ilana and Cedric harmonize and connect in a spontaneous way that isn’t often heard in modern recordings. Ilana’s original “Forevermore” – a Spiritual that came to Ilana in a dream, features her singing alongside Cedric’s mournful additional vocals, his blusey banjo, with the perfect touch of Daniel Sanda’s hand drum. “Movin’ On” ends – as her debut did – with Ilana playing solo. This time she plays “Jack of Diamonds” a traditional that shares many lyrics with the “Diving Duck Blues.”

Kansas City born and Boston, Massachusetts-based singer and fiddler Ilana opens this CD with a cover of Big Joe Williams’ 1935 version of Baby Please Don’t Go – the one I always recall as featuring Dad From Memphis on one-string fiddle. It is a fine choice, well sung and wonderfully played – thankfully not note-for-note – and one which bodes well for this CD. Ilana and the sleeve both define her style as ‘blues and roots fiddle’ and that is certainly what is on offer here.

There are blues in older styles; on six tracks she is supported in various roles by Cedric Watson (born in Texas in 1983), primarily on gourd banjo which imparts an archaic flavour to five numbers, and he plays fiddle on Blues For Bobby Radcliff, a five and a half minutes long Bluebird-beat styled instrumental. Well-known (and vastly under-recorded) Washington DC guitarist Bobby doesn’t appear on that number, but he does make significant contributions to the blues band performances: a rolling cover of Joe Liggins’ Tanya, Kansas City (where he takes a swinging Texas-styled guitar break), the slower original, Demon Blues, where Ilana’s playing sounds more like Sugarcane Harris, and the more up-tempo Cruel Willie Blues #2, which hints at a zydeco feel in the fiddle playing. There are some fine T-Bone Walker flavoured licks on the Big Bill Broonzy number Sweet To Mama; these are supplied by Barry Levenson, who also contributes a short but excellent West side Chicago flavoured guitar break to another original blues, You Crush My Soul, where again Ilana reminds me of Sugarcane Harris.Moving to the ‘roots’ side of things, Ilana tells us that she “can’t get enough of Tommy Jarrell”, the old time fiddler from North Carolina. Ilana’s excellent vocal and fiddle, and Watson’s banjo create a haunting feel on Reuben’s Train, whilst a solo rendition of Jarrell’s Jack O’Diamonds makes for a very memorable closer. Other old-timey offerings here are the medley of Lazy John/Sail Away Ladies, with Cedric Watson taking the vocals on the first part, and the traditional Greasy Coat. Ilana’s own Forevermore neatly straddles the line between blues and old-timey music.
To sum up, a rather different sound for today’s blues and roots scene. There is not much fiddle playing around in the blues these days, and Ilana certainly knows what she is doing – and those broad-minded enough will view the old-timey material as an added bonus. Recommended.

Ilana Katz Katz is a truly unique artist, from her two-Katz moniker to her deft fiddle playing culled from the deep-soul roots of the blues and rural folk traditions, topped by her unpretentious, almost otherworldly voice. Her playing is spare but virtuosic, while she adds her own style throughout, whether it’s on a Big Broonzy tune from the ’30s, the upbeat rock classic “Kansas City,” or her own bittersweet song of love lost, “You Crush My Soul.” Call this alternative Americana if you need a label, but it is a special, heartfelt album with additional strong playing by guitarists Bobby Radcliff and Barry Levenson, plus Cedric Watson on gourd banjo and washboard bass. A fascinating, history-bending album.
— Steve Morse, former staff critic at the Boston Globe for 28 years who now teaches a Rock History course at Berklee College of Music 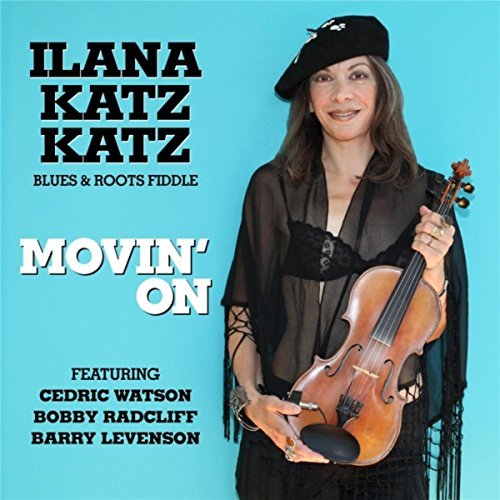 This album is now available

You can purchase this album from